Hi! I'm Luca Scalzotto
I am a passionate programmer, fanatic gamer and creative hobbyist.
> Home> My Projects> Posts
Back to projects

This project started thanks to a tweet by Notch: 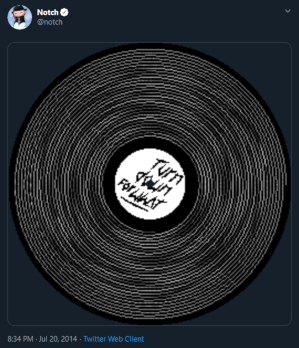 Encoded in the spiral is an 8-bit mono 4kHz audio track, containing 3 seconds of the song “Turn Down for What”. When I initially saw this I hacked together a tool in C# with Windows Forms that would allow you to read the image, and later I even added support for creating your own vinyls from a sound file.

Then, a few years later, I came across it again and figured it would be fun to completely redo the project with some major improvements, primarily making it browser-based so anyone can easily use it. A couple of coding sessions and a whole bunch of scope creep later, Vixyl was born!

Vixyl implements the idea of encoding binary data into an image in a more generic way. That means you can use it to encode any file into a vinyl.