This week's plan was to blend and taste our whisky. Our goal was not to create the most amazing whisky you've ever tasted. There is no way two amateurs could compete with the world's master blenders.

The goal of this project is to create an inviting whisky that makes you want to go for another sip, while still maintaining a fair amount of complexity. It should be an interesting whisky, but not distract from the work you are trying to do. 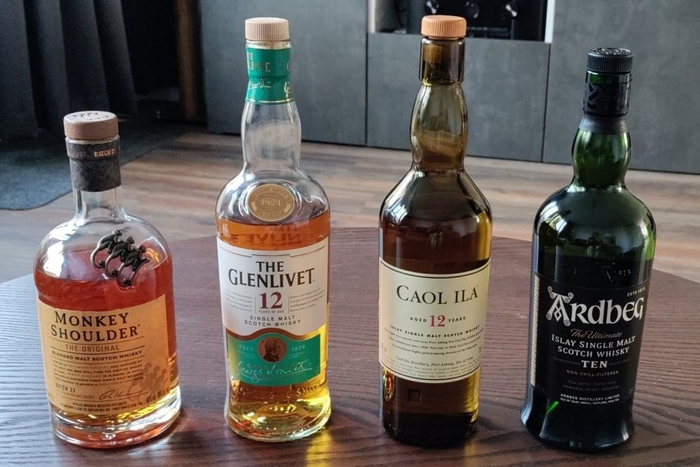 We picked four Scotch whiskies with some varying taste patterns. From left to right we have:

Without going into too much detail about the various tasting notes of all the different whiskies (there’s plenty of other sites who are much better at that), we picked these specific whiskies to have some variation in tastes. For sweetness we have Monkey Shoulder, for some not-very-complex body we have The Glenlivet, the Coal Ila gives you that smooth peaty taste, and the Ardbeg has a more complex and intense salty, smoky taste. This gave us some different tastes to play and experiment with, so we could try to find combinations that work together in the way that we want. 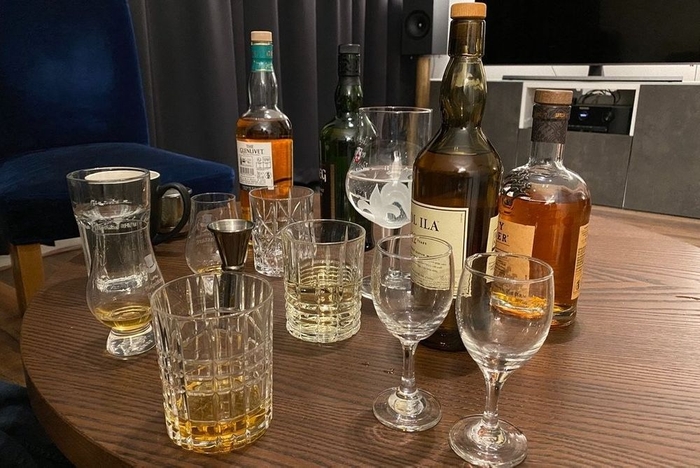 We made a couple of blends, each time using a total of 45 to 60 ml whisky, noting how much we used of each in an Excel sheet. In there we also put some notes to describe the taste, and ordered them relative to eachother. Here are our findings, based on the notes, in the order in which we created the blends:

Our very first blend was somewhat disappointing. While we didn’t necessarily have very high hopes, blending the sweeter Monkey Shoulder with the salty Ardbeg didn’t work out quite like we expected. We were hoping they would complement eachother, but in reality it just created a somewhat pungent tasting whisky, almost like the different tastes refused to mix together. It wasn’t an anywhere near an easy or inviting drink, so not what we were looking for.

In order not to change too many variables at once, for our second attempt we tried replacing the Ardbeg with Coal Ila, hoping that the smoother taste would combine better with the sweetness. While it was definitely an improvement over the first, it was still not near what we were looking for. There was more sweetness and herbs, and while it was very soft on the tongue there was more of a sharp aftertaste. Nicer and more drinkable, but overall just not great.

To offset the sharpness a bit we tried adding some Glenlivet to the blend. Because the Glenlivet itself is a fairly straightforward whisky, this also made the whole mix a bit less complex. This made the drink feel more agreeable, but it had lost most of its sweetness. It takes a bit to really hit you, and the aftertaste didn’t change too much. This was an interesting blend, but we did feel like we were missing some sweetness.

Since we had been relying a lot on the Monkey Shoulder, we decided to try something entirely different for this blend, and it turned out surprisingly nice. The taste sticks with you for quite a while, and while there’s not much of the Ardbeg on the tongue, it’s more prevalent in the aftertaste. It’s a very easy drink, and feels somewhat like an introduction to Islay whiskies. All in all not a bad attempt, although we felt like it needed some more body.

In an attempt to add more body to the previous blend we added some Coal Ila. However, contrary to our expectations this made the body less interesting, while making the aftertaste way more intense. We felt like it compares it to some hot sauces in the way it behaves, where you don’t taste it as much in your mouth, and then sets your throat on fire as it hits you. This made for a very interesting and actually surprisingly nice blend. Unfortunately it didn’t really fit our goal for this project, but it’s something we could see ourselves drinking more often.

For our final attempt we decided to go back and recreate our third attempt with different ratios. Our attempts to make the blend sweeter by adding more Monkey Shoulder hadn’t really worked as we expected, so instead we reduced it, hoping this would give some room to the other tastes in there. This gave the blend more body, and the taste actually sticks around for quite a while without changing too much. It’s also a nice and easy drink, without too much complexity.

As soon as we tasted our sixth and last blend, we decided that was going to be it. The sweetness, nice body, and the fact that it sticks around for a while without being too complex makes it great for the Ballmer Peak.

One point we realised we do need to watch out for: when creating and tasting the sixth blend we were essentially 5 drinks in (although they hadn’t been full glasses), which has a good chance of skewing our perception of the taste. With that in mind, there’s only one thing we can do: have another taste test next week with blend number six, to see if it’s actually as nice as we thought it was.

As a little bonus, both of us really liked blend number five. So if we ever felt the urge to create another custom blend, that would definitely be a good candidate.